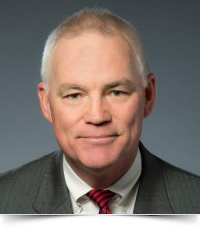 Northern Virginia native, Paul Bilodeau, Esquire received his bachelor’s degree in Business Administration from James Madison University in 1981 and his Juris Doctor degree from George Mason University School of Law in 1987. While in law school Mr. Bilodeau was a member of the law review and also was an American Jurisprudence Award recipient.

Since 2018, Mr. Bilodeau has served as Solicitor for the City of Newark, Delaware. Previously, he served as Deputy Solicitor from 2011 to 2018.

Mr. Bilodeau is married with four children and three grandchildren. His outside interests include road biking and skiing. He annually participates in the City to Shore and Bike to the Bay rides to raise money for the National MS Society. He enjoys working on and driving his 1953 Pontiac Chieftain. But most of all he enjoys spending time with his extended family.