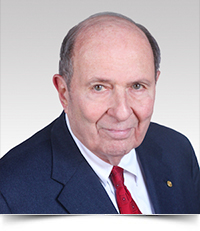 Jerome R. Balka is a Partner in Reger Rizzo & Darnall’s Philadelphia Office. For more than 60 years, Mr. Balka has dedicated his practice to serving clients in a wide range of areas. In recent years, he has focused his practice on issues affecting banking, including mortgage funding, loan workouts, foreclosures and issues arising from checking and saving accounts. He also has an extensive real estate practice, representing builders and developers of condominiums and other real estate projects and also assists clients to obtain mortgage financing. Additionally, Mr. Balka has served as counsel to a number of condominium associations throughout the region, providing legal advice and guidance for their daily operations.

Prior to entering into private practice, Mr. Balka served as a member of the United States Army’s Counter-Intelligence Service and also served as an Assistant District Attorney in Philadelphia, PA.

Before joining Reger Rizzo & Darnall, Mr. Balka owned his own firm, The Law Offices of Balka and Balka, and served as the Corporate Secretary and Director for Dixico, Inc. Mr. Balka also served for many years as a General Counsel for Prudential Savings Bank, providing advice and guidance with respect to mortgage banking and regulatory issues.